I know I know, yet another review about Gazi in Melbourne. Does George Calombaris really need more of a leg-up? Probably not, but his contribution to cuisine in Melbourne should be acknowledged. And no, I'm not referring to Masterchef. Honestly, I could not give two 'you-know-whats' about most reality TV shows, let alone one where all of our natural senses get repeatedly assaulted by Matt Preston's 'look-at-me' cravats. That being said, I suppose any show that re-engages people with food should be commended.

But allow me to backtrack from this tangent and get back on point. My real interest in Gazi comes from my often neglected Greek heritage. I owe much of my culinary education to my Nonna (I know, 'nonna' is Italian. It was a confusing childhood, roll with it) and her three sisters. I have many memories of Greek Easters and family gatherings where unbelievable amounts of home-made Greek fare mounted every surface in the house, none of which you could knock back. Not that you'd want to of course, but have you ever tried to knock back food offered to you by a Greek Grandma? You're taking your life in your hands if you do! 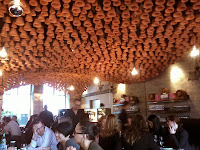 The problem for me with going out for Greek these days is that most restaurants are far less accommodating to my vegetarian needs than my nonna. Fortunately, Gazi has a wide array of meze to cover most dietary preferences. No fuss Athens street food, that's the order of the day. Unlike its predecessor on this location The Press Club, there's a more chilled out vibe at Gazi, a Greek diner motif. There's a stack of backgammon boards near the entrance, presumably free to use for diners. That being said, I'm not sure how keen the wait staff would be on a backgammon tournament starting up during dinner hours. The ceiling is obscured by kitsch hanging terracotta pots, and the kitchen is open plan so that you can see the flair with which your dinner is being whipped up, presumably just like on the streets of Athens.

Oh yeah, that brings me to the food.

DIPS: Served with lightly grilled house-made pita
Zucchini, Feta & Mint - Lumpy and green, almost salsa-like. Offers almost lemony undertones, countered nicely with the sharp taste of the feta. In stark contrast to the smoother consistency of the more yoghurt based dips. My favourite.
Miso Melitzanosalata - An interesting twist on a Greek classic, this version has a creamy texture, the bitterness of the eggplant countered by the saltiness of the miso, and finished with yoghurt and capers for extra tang.
Sweet Potato skordalia, pinenuts, orange - Skordalia: another Greek staple I remember from my childhood. This was the dip I was looking forward to the most. As a result - perhaps unsurprisingly - it was the most underwhelming of the three. That says more about the quality of the other two than it does about this one. I love my garlic, however the strong garlic-y tones I recall from my youth were absent here, a little overpowered by the sweetness of the sweet potato (yep, sweet potatoes are sweet. Must remember that).

ETHNIKA VROMIKA (HELLENIC DIRTY FOOD):
Vegetables - I got the impression from our waiter that the vegetables in this dish are subject to variation. Today it consisted of various coloured heirloom carrots, radish, cucumber and celery, coated with a tomato and oil dressing, all sitting on a bed of tahini and garlic yoghurt. Very simple dish, prepare for things to get messy once the yoghurt and tahini climb all over the veg!
Cheese (Saganaki) - Fried in a generous amount of oil to add extra crunch, the large slab of saganaki oozes richness. A tip, don't do it all by yourself, your body won't thank you! Goes great with some of the lighter salads/dips.

WOOD FIRE GRILL:
Corn - Only a small half-cob, another simple pleasure, but what a pleasure it is! Outrageously coated in various seeds, you could mistake the cobs for bird-feeders. Add to this a generous (and I mean generous!) smattering of the Aleppo pepper mayonnaise to coat the cob and, baby, you just bought yourself a one way ticket to Flavour Town!

SALADS, VEGETABLES, PULSES & GRAINS:
Grean Peas Salad: Neglected from the online menu, this option consisted of peas and crispy fried cauliflower, dressed with a herbed garnish and almond dressing. A much lighter, summery option that complements the Saganaki nicely.
Fasolia: Fresh crunch of green and yellow beans, asparagus, shaved fennel, radish, and hazelnuts on a thick white bean skordalia. The bitterness of the bed of Skordalia is offset by the crispy greens. I was particularly drawn to this dish due to the fasolia I consumed in my youth. Doesn't stack up to my Nonna's version, but nothing ever does. Still worth a try. 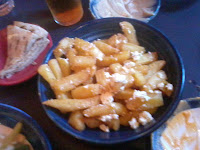 Chips: I know what you're thinking. Why go to one of Melbourne's hottest restaurants just to order chips?! Well slow down there Judgy McJudge, let me explain. Much like with Castrol where "oils ain't oils", at Gazi chips ain't chips. The house-cut 'tiganites patates' are crispified (it's a word) in a healthy amount of garlic and olive oil, then crashed together in a bowl with oregano and feta. If you take up a seat near the open kitchen you can watch the magic of it all unfold before you.

To accompany this plethora of food, I elected to go for a fresh juice over the ludicrously priced beer selection. One option stuck out above the rest: cucumber juice. Well, I'd be stupid not to, right? It tasted, well, pretty much how you'd expect I guess; like cucumber flavoured water. However, it was exceedingly refreshing. I can see myself blending many a cucumber to help cool myself down during our coming climate change infused summer days.

As you can see, there are ample veg. options, and there are plenty of others I was simply too stuffed to try, and not outrageously priced either. With all the hype, you expect Gazi to be good. And whilst there were a few underwhelming dishes, it has to be said, it still lives up to the hype!